Coming soon: premiere of the provocative play ‘Danton’ by Frljić 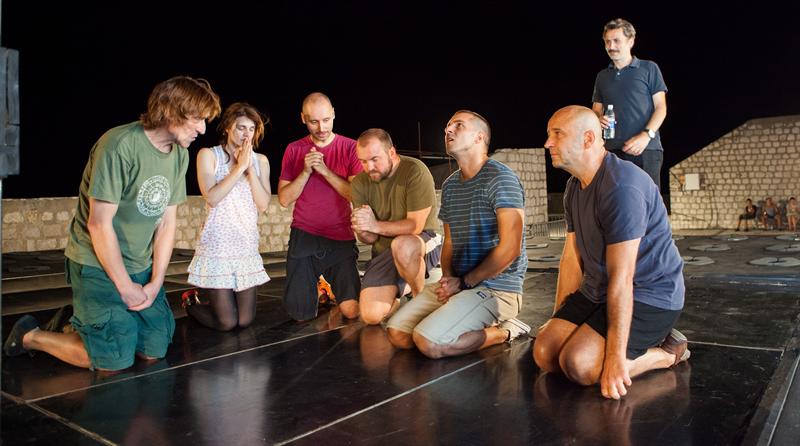 Büchner’s masterpiece about the French Revolution Danton’s Death directed by the most provocative Croatian theatre director, Oliver Frljić, is going to be premiered on 20th August 2012 on St John’s Fort.

The drama follows the historical events and the destiny of one of the leaders of the Revolution, Georges Danton, at a time when the Revolution was full of fear and terror. The famous line: ‘Revolution is like Saturn, it devours its own children,’ which Danton uses at the beginning of the play is a prediction of his own destiny and an accurate diagnosis of the sore spot of all social rebellions which always end in sacrificing their own protagonists in order to establish a new order. The director Oliver Frljić questions the (im)possibility of a revolution in today’s society. Has the concept of revolution been reduced to political activism? Is it possible to discern the contours of a new revolution in this general economical and political crisis?

The dramaturge is Marija Karaklajić, the set was designed by Igor Pauška and the costumes by Sandra Dekanić. Sreten Mokrović plays Danton, Milan Pleština plays Robespierre, and the other Festival Ensemble members are the excellent – Ivana Roščić, Dean Krivačić, Dražen Šivak, Nikša Butijer and Filip Juričić.

Because of its uniquely designed auditorium and explicit scenes of violence the play is not recommended to people suffering from claustrophobia or to those less than 16 years of age. Tickets can be bought online (festival-dubrovnik.hr) and at box offices in the Festival Palace and on Stradun at a price of 200 kn.

The play is in Croatian language and it is not subtitled.