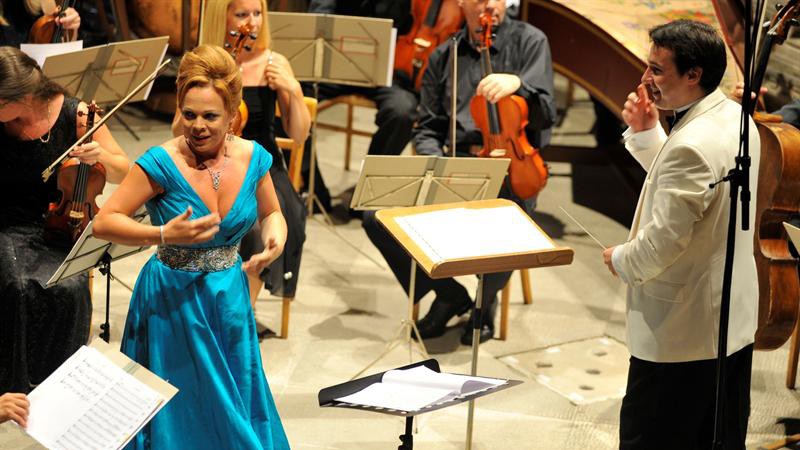 The end of the 63rd Dubrovnik Summer Festival will be marked by Opera gala programme with the greatest opera stars of our time – soprano singer Inva Mula and baritone Leo Nucci – and the Slovenian Philharmonic Orchestra under the baton of maestro Ivan Repušić. The concert will take place tonight, 25th August at 10.00 pm in front of St Blaise’s Church. The traditional taking down of the Festival’s Libertas flag from the Orlando’s Column will take place at midnight, after the concert.

Albanian soprano singer Inva Mula gained her opera star reputation singing at famous opera venues all over the world and she gained even more popularity when she sang the role of Diva Plavalaguna in Luc Besson’s film The Fifth Element. She regularly collaborates with the famous Ricardo Muti at the Milan Scala and after her three enchanting performances at the Dubrovnik Summer Festival (2009, 2008, 2007) we can say that this opera diva is truly adored by the Festival’s audience. Italian baritone Leo Nucci gained renown with his interpretations of roles from Verdi’s operas, especially that of Rigoletto which he has sung more than 400 times since he first went on stage in 1967. In 2003 he performed at the Dubrovnik Summer Festival with the Zagreb Soloists and pianist Paolo Marcarini under the baton of maestro Vjekoslav Šutej. The Slovenian Philharmonic Orchestra has been active for more than 300 years, which makes it one of the oldest orchestras in the world. They have collaborated with numerous renowned artists, such as Riccardo Muti, Zubin Mehta, Arthur Rubinstein, Yehudi Menuhin, David Oistrach, Arturo Benedetti Michelangeli, Svjatoslav Richter, Gidon Kremer, Vadim Repin, Ivo Pogorelić, Lazar Berman and Ramon Vargas. They have released more than fifty albums. Conductor Ivan Repušić is one of the most successful and most acclaimed young Croatian musicians who has gained renown both in Croatia and abroad. From the 2010-2011 season he has been Kapelmeister at the Hannover Staatsoper and in April 2011 he has a successful debut performance at the Deutsche Oper in Berlin, when he conducted La Bohème by G. Puccini and Macbeth by G. Verdi. In September the same year he conducted Verdi’s Rigoletto at the Komische Oper. From the next season he will be the Kapelmeister of the Deutsche Oper in Berlin. His was the winner of the Orlando Award for the best music performance at the 58th Dubrovnik Summer Festival and since 2009 he has been Music Programme Director of the Dubrovnik Summer Festival.

For this performance they have chosen some of the most beautiful numbers from famous operas by great Italian composers: Verdi’s Overture to Sicilian Vespers, Elena’s aria Merci, jeunes amies from the same opera, Germont’s aria Di Provenza il mar, il soul from La Traviata, Overture to Nabucco and Dinne, perchè… Figlia! a tal nome io palpito, Maria and Simon’s duet from the opera Simon Boccanegra. Verdi’s pieces will be followed by the Overture to The Barber of Seville, Figaro’s aria and Rosina’s aria Una voce poco fa. After the Intermezzo from Puccini’s Manon Lescaut, the audience will have the opportunity to hear Wall’s aria Ebben? Ne andrò lontana from the opera La Wallyby Alfredo Catalani, Gérard’s aria Nemico della patria from Umberto Giordano’s opera Andrea Chénier. Perfect finale of the evening will be Gilda and Rigoletto’s duet Tutte le feste… Sì, vendetta from Verdi’s Rigoletto.