As part of their annual Global Week of Service, the Hilton Imperial Hotel Dubrovnik helped with the renovation of a local nursery for children with special needs. The aim of the project was to bring some happiness to the youngest users of the Marin Drzic school with preparation work beginning on Thursday. An aquarium was painted on to the walls of the nursery by Hilton staff and when the job was finished a small party was put on by the Hotel where a donation was made to the school.

Hilton Imperial raised money for the school back in October at an event held on the Stradun where they sold traditional cakes and biscuits. Take a look at the picture gallery to see how the money was put to good use. 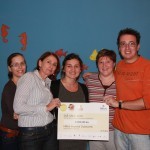