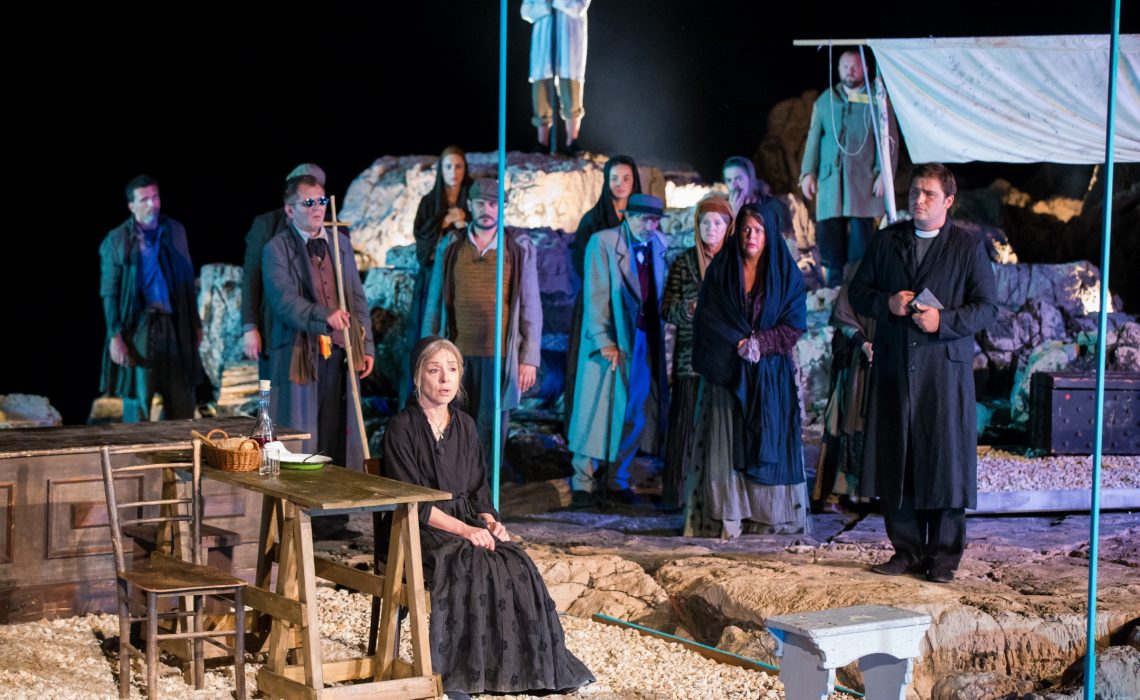 After a four-year absence, Ivo Vojnović’s legendary “Equinox” directed by Joško Juvančić has returned to the Dubrovnik Summer Festival’s program. Don’t miss your chance to see the play on the 6th and 7th of August on the Island of Lokrum.

This year’s first show was held on Sunday 4th August, on the same day when show premiered in 2004. That year, the play achieved great success winning four Croatian Theatre Awards, for Best Overall, Joško Juvančić for Best Director, Doris Šaric Kukuljica for Best Actress for the role of Jele and Deni Šesnić for outstanding contribution to the art of Lighting Design. With exquisite Festival Drama Ensemble cast, spectacular scene design on the southern cliffs of the island Lokrum and numerous awards, “Equinox” by Joško Juvančić is a highlight of Dubrovnik’s site-specific theatre.

Vojnovic’s “Equinox” is a story about pain and suffering of mothers and women in family of sailors, about leaving home in search of happiness and wealth. It takes place on a stormy night, when the storm is also raging in the souls of people urging them to express deeply hidden painful secrets. “Equinox’s” reprise, as Joško Juvančić claims, won’t be only reproducing previous performances, new faces on the scene will breathe in some new energy, perhaps even outshine the legendary 2004 performance.

This year “Equinox” is improved with subtitle application – now foreign tourists and people with hearing disability can enjoy the show using Vip script application that allows you to see real-time subtitles on owned or rented tablets and smartphones in English or Croatian language. The application was developed in Vipnet and UX Passion agency cooperation, and it was premiered on 64th Dubrovnik Summer Festival in July with Euripid’s “Medea”.

“Equinox” is scheduled for 6th  and 7th of August at 21:30 on the island Lokrum. Transfer boats departure from Old City Port at 20:30 and 20:50. Tickets are available online here.