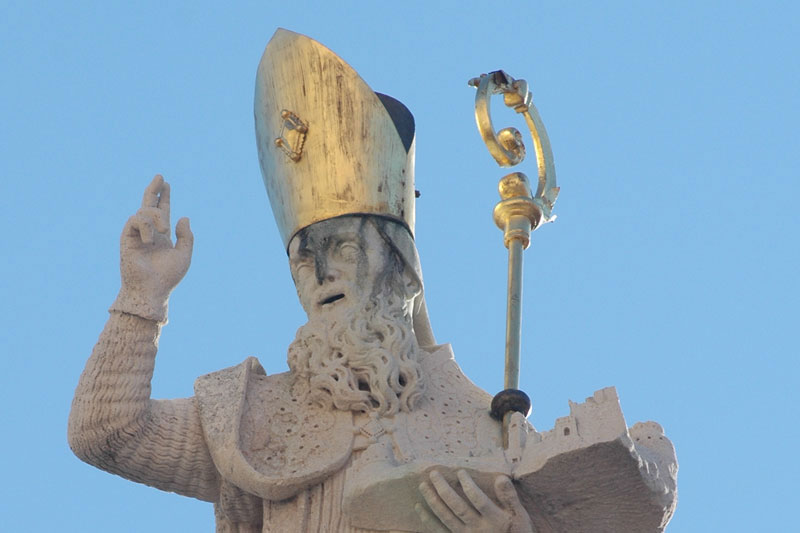 St Blaise was a 3rd century physician who became a Bishop of Sebastea in historical Armenia. He was martyred, his flesh was torn by wool combs, and finally he was beheaded. He has been worshipped as a patron saint and protector of Dubrovnik since the period of Dubrovnik Republic.

Chroniclers attribute the beginning of his cult to a vision in 971. In that year, the Venetian war galleys anchored in front of Dubrovnik Port in order to conquer the city. Under the false pretences of taking the fresh water supplies, they spied out the city’s defences. However, the city was saved by St Blaise who appeared in a vision to the parish priest Stojko. He was in the Church of St Stephen, attending his prayers and psalms when he saw an old man with long white beard and a sceptre in his hand who warned him of the imminent danger threatening the citizens by treacherous Venetians. The priest warned and saved the city from the attack. St Blaise became the patron saint and the protector of the city and his image the official symbol of the flag.

The stone statues of the patron saint have guarded the city walls, the northern and eastern entrances, forts and bastions, facades of the churches and palaces for centuries. The protector’s image illustrates the first page of the Statute of Dubrovnik from 1272 as well as many other manuscripts, codices, and charters. The official flag of Dubrovnik Republic proudly stood on Orlando’s column and sterns of Dubrovnik galleys. His image was engraved in many seals, coins, cannons, bells and medallions. He was not only the religious patron but also the city protector and his image was the insignia of Dubrovnik Republic.

In 1190, the unusual custom came into being under the name of St Blaise’s Liberty allowing all the indebted and officially exiled to walk freely the streets of the city three days before and three days after the Feast of St Blaise taking place on February 3 thus having the opportunity to settle their debts or visit their hometown.

Everyone who approaches the historical nucleus of Dubrovnik by land or by sea will inevitably be welcomed by the image of St Blaise and will realize the omnipresence of the heavenly protector in lives of its past and present inhabitants. 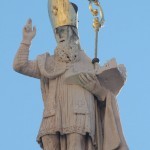 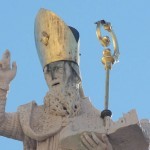