EUROPEAN CAPITAL OF CULTURE 2020 Decision is close, is Dubrovnik ‘the chosen one’?

Dubrovnik is one among four cities of Croatia that have recently been shortlisted in the competition for the prestigious title of European Capital of Culture (ECoC) 2020.

Together with our beautiful city, are Rijeka, Pula, and Osijek, who fulfilled the complex forms for ’round two’, and got some serious recommendations, made by a panel of independent experts evaluating applications from all 9 competing for Croatian cities at the outcome of a 3-day meeting in Zagreb last month.

In that period, the Dubrovnik candidacy team for the ECoC 2020, with Dubrovnik Summer Festival as one of the members, has submitted the final bid book to the Ministry of Culture of the Republic of Croatia. Thus, the first and most important obligation in the second and final stage of Croatian cities’ candidacy for the European Capital of Culture has been fulfilled. In addition to the presentation before the panel, the bid book will be decisive for the decision – which Croatian city, alongside with an Irish partner-city, will become a centre of the European cultural and artistic life in 2020.

City in the Making

The Dubrovnik candidacy concept, initiated in the pre-selection stage and entitled the City in the Making, remained the same. However, in the selection process, it becomes more detailed and precise through the programme section, the European dimension, and the development of a partnership with Croatian and European cities. The work on the plan and the process itself also reflected on the so-called ‘pre-production’ that took place in Dubrovnik in recent months including workshops and presentations (in the fields of heritage, experimental music, visual art and art theory), organized walking tours, visiting lecturers and artistic interventions within the project Candidate City: Public Exposure, says Dubrovnik Festival, and there is more info at official City in the Making page. 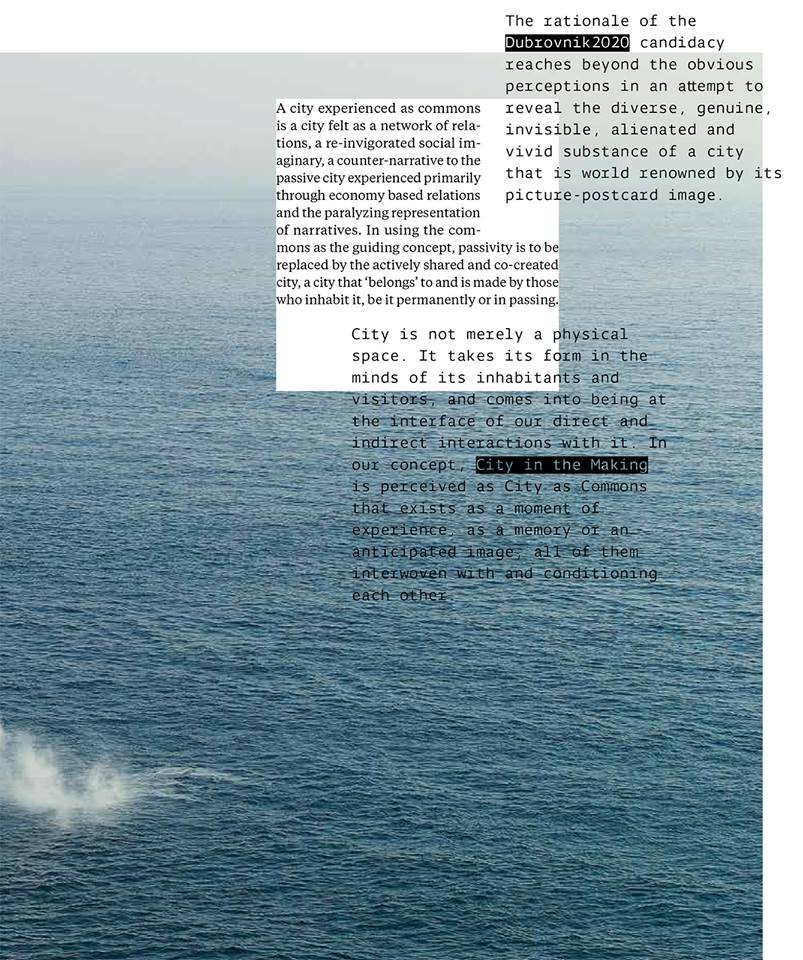 The cover of Dubrovnik’s bid book

The chosen city will be the first one to hold such prestigious EU title. The idea of ‘Capitals in Culture’ started in 1985, and since then the idea is growing in incredible European cultural project and one of the best known and most appreciated activities of EU.

If Dubrovnik becomes the ECoC 2020 (and we are 100 % sure that we will get the title!), its mission is to provide Europeans with an opportunity to learn about cultures, to share history, and to embed into one major European community. Interesting fact about candidacy is that even cities that have been shortlisted for ECoC 2020 have a significant cultural, economic and social benefits, provided that their bid is part of a longer-term culture-led development strategy.

Be sure to check all the news HERE. And stay tuned…