Time to Plan Your Stay: The Best Events in Dubrovnik in 2017 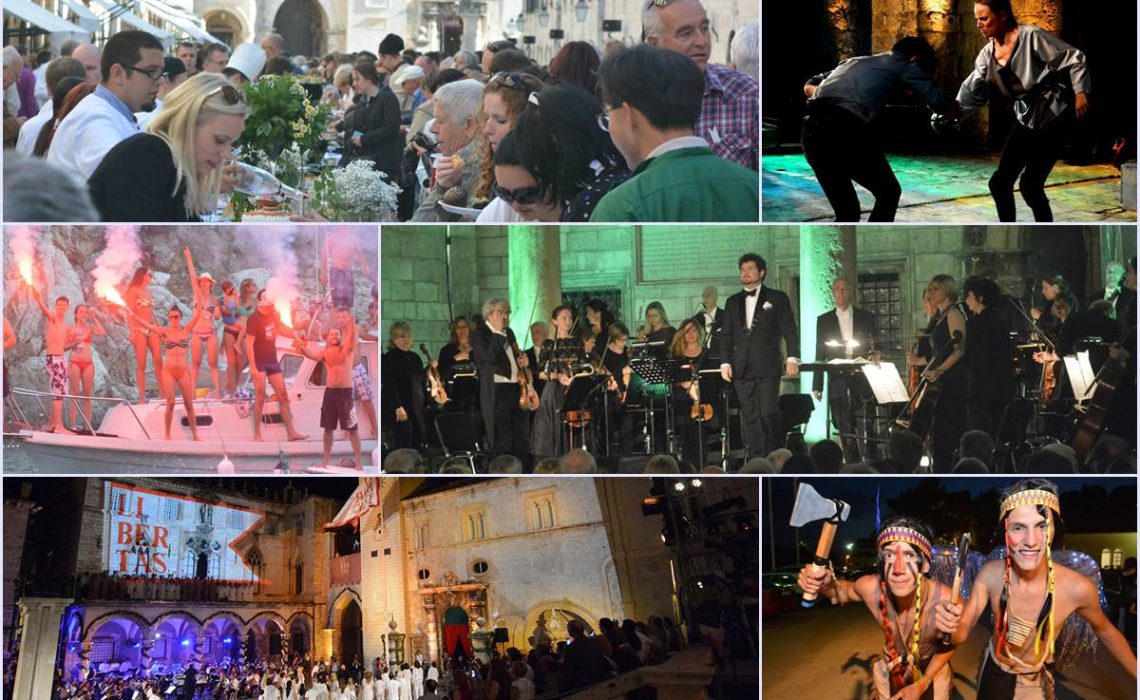 It’s the beginning of the new year and a great time to plan & book your holidays! In 2017, one of the best destinations (or at least among the most popular ones 😉 ) is again – Dubrovnik.

Here we present you top events that will be held in Dubrovnik throughout the year, the list made by Tourist Board Dubrovnik. Experience Dubrovnik – from world class galleries and exhibitions, amazing cultural scene, ambiental theater plays, to great fun, sun, sea, summer & parties. Be a part of Dubrovnik’s tradition, enjoy the folklore, but as well jazz, operas, traditional & popular music… Taste the tradition via amazing food festivals and the best regional wines. Find a hedonist inside you, and check out this amazing offer Dubrovnik has!

DUBROVNIK FESTA: 26 January – 2 February 2017
This multi-day event traditionally opens the official program of celebrations around the holiday of St. Blaise and the Day of the City of Dubrovnik.

FESTIVITY  OF ST. BLAISE : 1 – 9 FEBRUARY 2017
Ever since the year 972, when people began to celebrate it, the feast day of St Blaise, Dubrovnik patron saint, has been a quite special festivity, typical of Dubrovnik. A series of church and secular concerts, exhibitions, book presentations and theatre guest performances are dedicated to the patron saint of Dubrovnik, whose statues look at us from the city walls and gates and whose caring hand guards Dubrovnik on his palm.

DUBROVNIK CARNIVAL: 24 – 28 FEBRUARY 2017
Our ancestors also had fun, and so should we… is a proverb which one can hear in Dubrovnik in February during the carnival, the time when everything is allowed, when people become someone else or show their true face… Experience the special atmosphere of the Dubrovnik carnival festivities characterized by jokes, laughter, merriment, joy, satire… feel the special spirit of the City at carnival time!

AKLAPELA (Dalmatian songs festival): 21 – 23 APRIL 2017
Aklapela festival of the best Croatian vocal groups nourishes the authentic vocal singing, a festival named by a pun of the words klapa and a capella. Unlike other numerous established music festivals that are successfully held in Dubrovnik, Aklapela is an entirely national musical product and, with visionary artistic leadership, has the potential to become a referent value of Croatian ethno music.

DUBROVNIK FESTIWINE: 17 – 23 APRIL 2017
Tourist orientation of Dubrovnik and Dubrovnik-Neretva County represents a tremendous privilege and challenge to local winemakers. It brings thousands of curious visitors to their cellar each year, and many of them are knowledgeable about wine. The central event of the project „Wine Tourist Network – WiNe“ is Regional wine festival – Dubrovnik FestiWiNe which will be held in Dubrovnik again in April. The festival will gather more than 100 regional winemakers who will have the opportunity to present their wines to numerous wine professionals and visitors. Domestic high quality wines of authentic varieties represent powerful, underutilized competitive advantage of this area.

Quiet please, Dubrovnik and film love each other…: 25 APRIL – 3 MAY 2017
Held last year for the first time, this Dubrovnik film event thrilled visitors, especially with the exhibition on the history of film making created on the principle of ˝Augmented Reality˝ through which tourists and Dubrovnik locals had the opportunity to become acquainted with all of the links between the City of Dubrovnik and film culture over the last hundred years, as well as other varied and appealing options for all ages. Due to the festival’s success last year, the organizers have had great incentive to create and interesting program for 2017 which will hold many surprises.

DUBROVNIK HALF MARATHON: 29 – 30 APRIL 2017
The attractiveness of this new sporting event is based on the fact that Dubrovnik – the host city is part of the UNESCO’s world Heritage. The terrain  is very attractive for marathon running, especially 2K (two-kilometer long) race with a limited number of participants held at Dubrovnik walls, Dubrovnik’s most important attraction. Half marathon route is 21.1 km long, starts at Ploče,  passes through the Pile up till Kantafig in Gruž, with a turn near the Marina Komolac and finish in the best possible venue – Stradun. With the motto “More than a race” this new event, as planned, will be more than just a sporting event, through running healthy lifestyles will be promoted, all in “hugs” of Dubrovnik historical monument, with Klapa songs and blessings of Dubrovnik’s patron saint – St. Blaise – as protected elements of intangible heritage in the UNESCO’s.

LE PETIT FESTIVAL DU THEATRE: 15 – 18 JUNE 2017
This is a small festival, but a special and distinctive cultural event in which artists represent and artistic talents from around the world. Le Petit Theatre du Festival every year raises the curtain revealing creations carefully selected and talented artists whether they are poets, actors, dancers, or something else.

MUSIC SCENE FESTIVAL ‘ANA IN TOWN’: 21 JUNE 2017
The weekend festival Ana in Town celebrates a young artist, a cellist with a recognizable musical style, Ana Rucner in a double role as classical musician and crossover instrumentalist. A fantastic concert at the dawn of the first day of summer and World Music Day on June 21st is an exceptional artistic event and unique view and experience of sunrise at the top of the Srđ Mountain.

MIDSUMMER SCENE: 21 JUNE – 7 JULY 2017
Midsummer Scene is an established theater festival held in English that uses one of the most beautiful stage ambients – Dubrovnik’s  St. Lawrence Fortress – which is the stage for Shakespeare’s most well-known dramas, realized through the cooperation of British and Croatian theater artists.

SUMMER EVENTS PROGRAM AT DUBROVNIK SURROUNDINGS:  1 JULY –31 AUGUST 2017
For many years the City of Dubrovnik and Dubrovnik Tourist Board have been organizing music and  entertainment programs on the Elafiti islands, and in Zaton and Orašac in order to present tourists the Mediterranean melody, folklore and folk traditions that have been cherished for ages. Within special programs with traditional folk festivities and holidays guests will be able to enjoy some thirty  performances this summer such as: Dalmatian vocal groups concerts, folklore performances, classical music concerts and performances by Croatian music entertainers which will be held on Koločep. Lopud, Šipan, in Zaton and Orašac.

DUBROVNIK INTERNATIONAL OPERA FESTIVAL: 30 – 7 JULY 2017
The festival is named after and organized in the memory of the world famous tenor Tino Pattiera, one of the major singers at the opera houses both in Europe and worldwide in the first half of the 20th century. The International Operatic Aria Festival Hommage Tino Pattiera was founded aiming to become another permanent operatic event in our city, to complete the operatic milieu of Dubrovnik, and to present the most beautiful operatic output of the greatest composers to its audiences.

DUBROVNIK SUMMER FESTIVAL: 10 JULY–25 AUGUST 2017 68th
Dubrovnik Summer Festival is undoubtedly the largest and most representative cultural manifestation, not only in Dubrovnik, but in all of Croatia. It is held since 1950 and lasts every year from 10 July to 25 August.

STARS BENEATH THE STARS: 10 JULY –1 SEPTEMBER 2017
Dubrovnik hotel group Adriatic Luxury Hotels organizes for many years now  an entertainment music summer program of the very expressive name “Stars beneath the Stars”, for the city of Dubrovnik and its guests. The most attractive outside venues of the 5 star hotels –beaches, terraces, pools – serve as a breathtaking open sceneries where concerts take place under the stars.

WATER POLO WILD LEAGUE: 12 JULY –6 AUGUST 2017
Today Dubrovnik Local beaches Water polo Championship is the largest amateur competition in the world. More than 40 teams jump into the sea every year at the beginning of July, and start the battle for the champion title.

ŠIPAN SUMMER  FILM SCHOOL: 4 – 14 AUGUST 2017
Each summer on the island of Šipan the summer film school and film festival called ˝Šipan Film Summer School˝ is held. The event has an international character since the films, participants in the program, and festival guests come from Germany, Croatia, Bosnia and Herzegovina, Slovenia, and the United Kingdom. Under the auspices of the City of Dubrovnik, the film festival in Šipanska Luka lasts from August 4th to 14th, and ten selected films are shown. ˝Šipan Film Summer School˝ takes into account the specific situation of a Dalmatian island. In winter it is a closed environment, and in the summer months through cinema the island communicates with the whole world. School children from Šipan have the opportunity to be creative together with their peers from Europe and the around the world.

MUSIC FESTIVAL – DUBROVNIK IN LATE SUMMER: 26 AUGUST – 22 SEPTEMBER 2017
The new festival that will last until mid-September was recently launched by the Dubrovnik Symphony Orchestra in order to keep the presence of music and cultural vibrancy in UNESCO’s Dubrovnik after the Dubrovnik Summer Festival.

FESTIVAL OF JAMS AND MARMALADES: 7 – 8 October 2017
In the atmosphere of preserving culture, heritage and traditions, the event is held on Stradun in front of the Church of St. Blaise. Exhibitors dress in the national costumes of the places from which they come, from counties from all around Croatia, and present their products to visitors and Dubrovnik restaurateurs caterers, who will use these native delicacies to elevate and enrich their gastronomic offerings.

Tennis tournament: ITF MENS FUTURES & ITF WOMENS CIRCUIT: 7 – 21 OCTOBER 2017
One of the most prestigious sporting events in Dubrovnik, of an international in character, which served as the career beginning for a number of big names in men’s and women’s tennis from Croatia and Europe, and which confirms its status as a prestigious tennis tournament for younger generations through the number of participants and the interest of the sports public.

GOOD FOOD FESTIVAL: 19 -22 OCTOBER 2017
A number of new and interesting gastronomic programs are found within this unique project of the Dubrovnik Tourist Board, which has become an exceptional supplement to the regular tourism offerings for tourist in the autumn month of October and has become a favourite among the locals, as well. The new edition of the Good Food Festival brings presentations of culinary specialties typical for our region, educational programs for children, tastings of regional wines, culinary workshops, and events such as ˝Dinner with a famous chef˝, workshops on preparing Dubrovnik delicacies, special menus in Dubrovnik restaurants, an ˝Eat & Walk˝ culinary tour, a ˝Sweet Tooth Map˝ for gourmets, as well as other surprises.

DUBROVNIK WINTER FESTIVAL: November 2017 – March 2018
Launching Dubrovnik Winter Festival and its extensive and versatile program, Dubrovnik – the city of festivals and festive events – will combine fun, culture, enjoyment, gastronomy and art on the most attractive stages in the City and its surrounding areas.The unique heritage sites and venues, such as Peskarija, Stradun, Pile and Lazareti, will be enlivened by their new image and holiday illumination. The festival offers innumerable reasons for gatherings. Bring your children to the skating rink, or to the Christmas Tale show, warm yourselves with mulled wine and enjoy Croatian style doughnuts in front of the Cathedral, or dance in the tent by Orlando’s Column. Have fun at the theater, visit galleries and museums, and learn how to make Dubrovnik’s traditional sweet delicacies.

ADVENT IN THE CITY
The program of Dubrovnik’s winter festival – Advent in the City – begins with the lighting of the first Advent candle. The uniqueness of Dubrovnik is also visible during the month of giving. This year’s Christmas market will be set up on the most beautiful street in Dubrovnik, Stradun, where traditional craftsmen will present their handicrafts, Christmas decorations, and traditional Christmas cakes and sweets will be offered as well. Try to sing the traditional holiday songs, the Dubrovnik kolenda (carols), which have been sung on Christmas Eve and on New Year’s Eve since olden times, offering congratulations and wishing everyone a joyful holiday!

NEW YEAR’S EVE
Dubrovnik’s many visitors will bring in New Year’s 2018 while entertained by a spectacular music programme which will already begin in the morning hours of December 31st, New Year’s Eve. The New Year’s program includes a diverse, entertaining three-day program, in which everyone will find something interesting. The New Year will begin with the traditional New Year’s Day 10 km race, and a special treat will be a concert of the Dubrovnik Symphony Orchestra, paired with oysters and champagne, beginning on New Year’s Day at noon.